Purchase raffle tickets for the chance to win impressive prizes!!!! 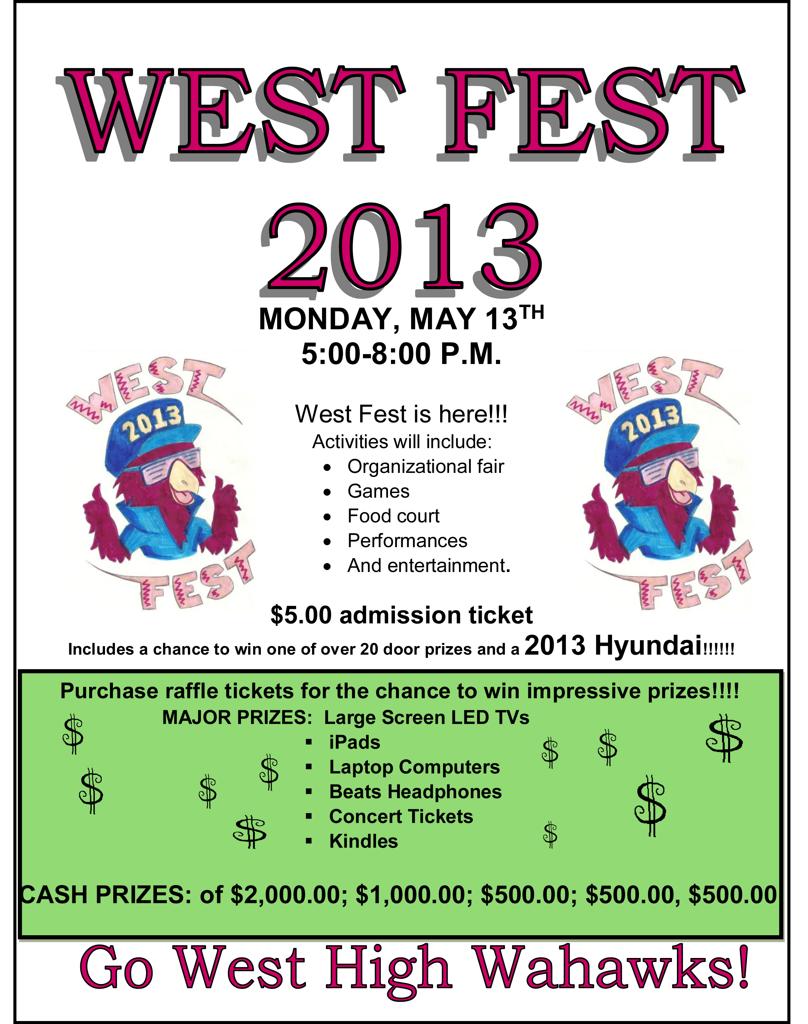 WATERLOO, Iowa --- Organizers are promising a bigger and better West Fest with the addition of, more food vendors and new carnival games. And as usual, attendees will have a chance at winning dozens of valuable prizes.

West High School's spring festival and organizational fair is returning for a second year Monday following a seven-year hiatus. Billed as the largest high school festival in Iowa, it will be held at West from 5 to 8 p.m. Admission is $5, which will enter attendees into a drawing for 20 door prizes.

"The theme is 'West Fest is back again,'" said Tony Pappas, West's athletic director. The evening is a fundraiser for the school's athletic booster club. "Last year, just under 1,000 attended," he noted. "This year, we hope to have even more."

Door prizes include iPods, head phones and gift cards for such things as stores, gas and West High apparel. At the end of the night, a name will be drawn for one person to take a half-court shot in the gym. If the person can sink a basket, he or she will win a 2013 Hyundai on display at the festival.

Raffle tickets also will be sold at $10 each for a chance to win one of more than 20 major prizes. Among those will be large screen LED TVs, iPads, laptop computers, Beats headphones, concert tickets, Kindles and cash. Cash prizes will be awarded for $2,000, $1,000 and three for $500. People don't need to be present to win the raffle.

Aside from the prizes, the event will include a bazaar where a number of school-related items can be purchased, a food court, a silent auction and various entertainment options.

Three student musical theater performances will be scheduled for the evening at 5:45, 6:30 and 7:15, which is a new feature this year. A DJ will also be playing music throughout the evening. Pappas said vendors will feature the typical festival food from past years plus an expanded offering of ethnic foods.

A student senate fundraiser for the creation of Angel's Park in Evansdale memorializing murdered cousins Elizabeth Collins and Lyric Cook-Morrissey means one of 10 nominated West staff members will get a pie in the face. Attendees vote by putting money into one of the containers designated for each of the staff members. The staff member with the most money in the corresponding container gets a pie in the face.

Another new feature is the dunk tank manned "by several of our important staff members," said Pappas, including Principal Leslie Morris, PBIS coordinator Danielle Meyer and others.

The organizational fair will include booths --- many of them interactive --- for West's cultural groups, clubs, academic groups, athletics and activities. The fair serves as an introduction to West's activities for incoming freshmen.

"It is a high school festival that really promotes all the activities that are going at West High School," said Pappas. "We have so much going on here, we're trying to showcase it."