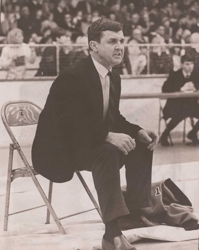 He is famous for coaching Dan Gable, arguably the greatest college wrestling coach, and for his incredible records set at West Waterloo High School, Waterloo, Iowa.

He is loved by his former wrestlers for his ability to motivate, counsel and mentor like a master psychologist.

To Siddens, all of his wrestlers were the same – special – and he was very careful to treat them all the same, like members of his family.

Robert Siddens modestly explains that he was a good, not a great, athlete.

In wrestling, he qualified for state all four years, finishing second twice. He set a school record for the half-mile in track, and played both offense and defense on the football team.

After a stint in the service during World War II, he was recruited to play football and wrestle at the Iowa State Teachers College, now the University of Northern Iowa. While there, he trained with some of best college wrestlers ever and participated on a team that took 2nd in the nation.

His first year at West High, 1950, his team won the Iowa state championship.

At one point his teams won an amazing 88 consecutive dual meets, and completed 14 seasons -- more than half of his coaching career -- without a defeat.

He retired in 1977 with a (then) national record 327 wins, 26 losses, and 3 ties, averaging less than one loss per year. Also, during this span, high school wrestling in Iowa grew from 28 to over 300 programs and enjoyed the reputation as one of the best high school wrestling states in the country.

In a state synonymous with wrestling, Siddens’ teams have won more state wrestling championships than any other program in Iowa history.

Furthermore, when one considers that the West High wrestling room has created more NCAA champions and championships than any other of the approximate 10,000 public or private schools that presently sponsor wrestling in the entire country, Coach Siddens coached nine individual NCAA champions and one Olympic champion.

The Olympic champion, Dan Gable, who later built a wrestling dynasty at University of Iowa, credits Siddens with his coaching philosophy. As a result, Gable earned the loyalty and motivation of his wrestlers and won 21 straight Big Ten championships and 15 NCAA championships.

Mentoring all of his wrestlers

One thing about which all of Coach Siddens’ wrestlers knew was that they were all “special” in their coach’s eyes. One reason why Bob Siddens constantly hears back from all of his former wrestlers is that they all admired him and have taken extreme measures to stay in touch with him.

Siddens rarely found the need to yell at the kids when he coached them. He used an authoritative, soft-spoken approach. He is famous among his ex-wrestlers for all of his quotes, one of which was “always be a gentleman off the mat, and always be a tiger on the mat.”

He gained loyalty by simply treating them all as he would treat the closest members of his family.

Bob Siddens’ influence has been felt by every wrestler he coached. That is a fantastic legacy.

Siddens is greatly respected as one of the great high school and college referees of all time. He has officiated 27 NCAA tournaments and at least as many state tournaments, in many of which he was the head official.

For most of Coach Siddens’ career, he traveled the country, particularly during the summer months, presenting clinics to all the young wrestlers eager to hear wisdom from the coach who developed so many great wrestlers. He was invited to instruct in ¾ of the states, including Alaska and Hawaii.

Bob Siddens has been voted into the following halls of fame:

Other Honors, Awards and Positions

Bob is married to Joyce. They have six children – JoEllen, Scott, Todd, Beth, Erica, and Kara, thirteen grandchildren and one great-grandchild. He is very proud of all of them.

Bob is fond of quoting his father who used to say, “Old age is not for sissies.” To prove that, Bob swims his age in laps every year on his birthday. 85 years old – 85 laps. No wonder he’s an icon in Waterloo…. And everywhere else in the country!

A collection of photos and images of Bob Siddens during his coaching and refereeing careers.